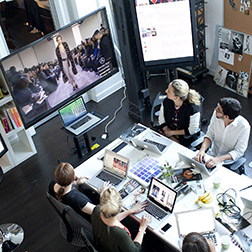 As fashion month kicks off in New York and continues around the globe, WGSN, one of the world’s leading providers of intelligence and big data to the fashion and retail industries, as well as the official trend sponsor of Mercedes-Benz Fashion Week, will be reporting live from its first ever social media news room to provide more access to fashion trends and data than ever before. With this command center, WGSN aims to engage, excite and educate its followers with real-time commentary from its global editors, including in-depth critical analysis and commercial insights on the best of the collections and emerging trends.

· Command center will provide a constant stream of real-time catwalk data, including what’s trending, popular hashtags and visual feeds of the trends across Instagram and Tumblr platforms

· Experts from WGSN offices around the world will be joining in the conversation, creating a hub of information with a global perspective  #EditorTakeover

· A global team of 30+ editors will live tweet from the shows across New York, London, Milan and Paris Fashion Weeks, using their market expertise to provide real-time critical reviews in 140 characters or less

· September 6: VP North American Content, Sheila Aimette will provide a behind-the-  scenes look at fashion week through the eyes of a trend forecaster

· September 8: Conversation will explore the role of a trend forecaster during fashion week, featuring WGSN editors alongside industry experts

· September 16: Experts will cover digital innovations used during fashion week from a brand and technology stand-point, with special guests to be announced

· Profiles of WGSN team members, including head of catwalks, head of image management and digital marketing team, among others, to be featured on blog

· New York and London social media news rooms to host a full day of content sharing o Content to include stats on the key looks and colours to know about pulled from WGSN’s catwalk analytics, as well as infographics sourced from new-in data via WGSN INstock

Enter your email address to receive snippets of the best content from WGSN, hand-selected from across our platforms and delivered straight to your inbox.

For a glimpse into WGSN membership, visit our free content stream